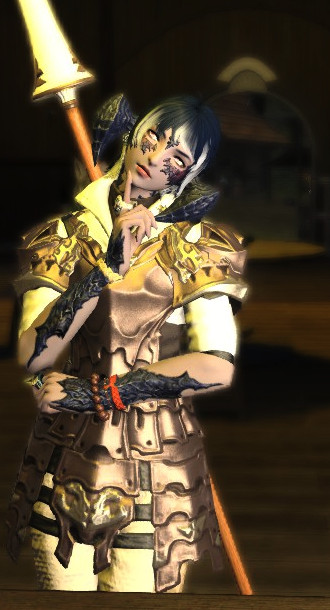 As Warrior of Light, Dalii's fascination with the natural world was the first manifestation of her Echo. As an ordinary Xaela traveler to post-Calamity Eorzea, it happened because you don't need the blessing of a giant glowy rock to realize that there is infinity in a patch of lichen. Her backstory as her tribe's beloved problem child is identical, but she is a lancer, botanist, and culinarian only. She came to Eorzea with little understanding beyond what is generally known--that Gridania is attuned to nature, that Ul'dah is a mercantile hub, Limsa Lominsa is full of pirates, and Ishgard doesn't like anyone, especially people who look like dragons. After a year or two here, she's since come to grips with the good points and bad points of Eorzea's city-states. While she can still be somewhat naive to Eorzean ways, she's good at landing on her feet. (I'm completely open to playing both WoL flavor and Adventurer flavor Dalii, but WoL!Dalii is definitely marked by. All the things that happen.)