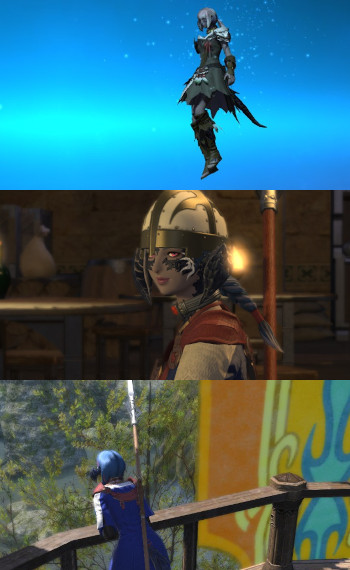 The Warrior of Light, Defender of Eorzea, Torchbearer, Icebreaker, the Final Witness....

but really, she's just a Xaela far from the Azim Steppe. Two generations ago, the Yagaan tribe was pushed to the harsh northern mountains after arousing the wrath of a spiteful Khagan, and thus far they haven't been able to return to better places. Dalii was born into cold, deprivation, and difficulty. Never having known anything else, she grew into a tough, hardy, and defiant young woman. As she gained in years, she likewise gained a fascination with the plants and animals around her, things that not only survived but thrived in the harsh climes of the northern steppes. Unfortunately, her adventures and misadventures in trying to study and admire these living things led her up cliff faces and near deep rivers and too close to bears... and worse, she had a temper. When it came time to deal with other tribes and their allusions (or outright insults) about the reduced status of the Yagaan, Dalii did not restrain her wrath.

This fecklessness resulted in great exasperation among the adults and elders of the tribe, but--as is so often the way--the youth of the Yagaan found much to admire about her audacity. They began to follow her on her nature expeditions and recount her latest insults, and the danger there was obvious to everyone but Dalii and her miniature troupe of fractious naturalists. By the time she was twenty, Dalii was embroiled in arguments with her parents, her cousins, and her elders at least once a week.

One day, Dalii declared that she would go to Eorzea to live the life of an adventurer and seek a greater education in the natural world and the fighting arts, in hopes that she could come back and lead her tribe back out of hardship. She was prepared to argue her point strenuously, because young and fit members of the tribe were discouraged from traveling and taking their strength and skills with them. Instead, her parents and the tribe elders agreed at once. They filled her pack with supplies, handed her a lance, and wished her well on her journey--which she wasn't to rush.

Upon arriving in Gridania, Dalii soon found that she was equally fascinated with people as a form of life and became as invested in the habits of energetic pugilists, semi-reformed smugglers, and panicky merchants as she was with giant ladybugs and flying jellyfish. Dalii found a great deal of gratification in the adventurers' routine of doing fetchquests in exchange for money, meals, and bits of equipment... and not long after she had embarked on this new life path, a bunch of creepy guys in robes decided to intrude into it.

As a person, Dalii is an open-minded and cheerful soul. She's curious to the point of nosy, willing and eager to learn about anything and anyone. Having been raised in an isolated corner of the Steppe and frequently scolded for her foolhardy behavior, Dalii has never thought of herself as someone of particular ability, although lately she is making efforts to improve her mind. She doesn't bear a grudge--a number of her present friends have tried to kill her at one point or another--but when her temper is roused it is fierce and hot. She isn't a woman with deep stores of patience, either. When confronted with something nasty and powerful her first instinct is to go right through it, and she's grown a little too casual about tackling challenges against extreme odds.

In spite of her blunt-force approach to many problems, Dalii has a respect for life that drives her actions. She'll take on tasks to prune and cull animals when they threaten the local environment, but she dislikes the idea of hunting for the sake of it. When exploring, she makes an active effort to go around aggressive beasts--it's their territory, after all, and they have reasons not to want her in it. When botanizing she's careful not to over-harvest.

Though patient with quirks and tempers and being sent into danger by someone who harbors a secret shameful wish that she'll die, Dalii has her limits. The most dangerous thing to do in her presence is be a willful and persistent threat to life. If she determines that you threaten the ability of living things to live, she will not stop until she has rendered you unable to continue your activities. And if that means she has to kill you, then she will, and without losing very much sleep.

Hi! I am Inky, and Dalii is my character. Like Dalii, I am an ecologist, although my work is not quite so full of incident and wild personal upheavals as hers is (I've gotten some nasty jabs from rosebushes though). I also write and draw and generate maybe more Final Fantasy V fanwork than is strictly necessary. If you see me on Balmung, say hello!